Another major Killarney crime story, just after the major vandalism on top of Carrantuohill! Jaysus Killarney has gone to the dogs.

(The local Kerry Radio station reported ‘breaking news’ on Tuesday that a video was sent to journalists vandalising the cross and spouting anti-catholic sentiment).

I love the local papers and radio here in Kerry – very reminiscent of the Cape Courier crime log and local Maine news.  When I was home for a visit, the local Maine news was dominated for at least three days by the story of a large venomous snake being found by the movie theater near the Maine Mall abandoned in a dumpster I think.  While it’s fun to chuckle at small town problems in relation to large scale issues, it is also a great reminder of how nice it is to live in a state, county or country where your life isn’t filled by the horrors of crime and violence endlessly.

For those of you not lucky enough to live in Ireland, you would have no idea that the above news story is above Irish Travellers.  This is a fairly common – ‘men in vans’ signifies Travellers to those of that live in Kerry (and probably most of Ireland).

“Red Berry Hoooolly here” is a familiar call at Christmas in Kerry towns.  Holly is pronounced more like ‘Hawlay” in the unique accent of the men that ‘harvest’ and sell holly branches along with Christmas trees and wreathes outside major shopping areas in Tralee and Killarney. By harvest I mean drive around the boreens of the county and cut branches. And apparently hacking down entire trees in Killarney National Park. No fear though the cavalry are on the case. I wish I knew who the cavalry are in Killarney, any ideas?

Irish Travellers are the group of once nomadic Irish who were known as Tinkers or Gypsies and often by the derogatory term knackers. In Kerry, Travellers are referred to as Pavees by the ‘country people’ (non Travellers) which is a word from their own language but many Travellers in Kerry found the term derogatory which isn’t the case in other parts of the country.  In Galway, they are known as Shams.  If you haven’t been in Ireland for a while than you might have an image of Gypsy caravans and campsites similar to this one below.

I spent six years working with the local Traveller community in Tralee and around Killarney while working on social policy with the local government and other local service providers.  Irish Travellers today live in a social housing (housing provided by the state) or halting sites, both unofficial and official. Today these sites are anything but quaint. I was and am intrigued by the complete separation between Travellers and the rest of Ireland, as well as the Irish state’s continued blind-eye to the criminality, welfare fraud, and domestic abuse that marks Traveller culture today.  There is a strange neglect that has left Travellers outside mainstream society and at the same time provided social welfare on a long-term basis for the communities as a replacement for a role in Irish communities.

These images below are of halting sites around Dublin – there aren’t any of these permanent sites in Kerry but while on holidays in the summer, Travellers gather at different places around the county and these temporary sites are quickly piled high with rubbish and debris. 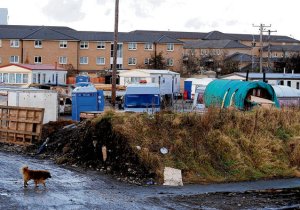 I somehow landed on a group of professionals and community members attempting to mediate between a violent feud in Kerry while I was pregnant with my son.  The stories we heard about long-standing and recent disagreements between characters called Ferret-Eyes and Steel Jaw which now played out between women and children outside schools and in street brawls with slash hooks and baseball bats near a cemetery were unbelievable.

After having my son and getting my mind somewhat back in order a year later, I started to write bits and pieces about these families and their lives.  I then started focusing on the relations between the women within these large patriarchal families . There are a lot of rules in families and particularly in Irish families and no one has more rules than Traveller women, both unspoken, spoken, clear and totally unpredictable. I am currently writing a novel about a woman married into a strong Traveller family involved in feuding.  When I read about the cavalry being brought to police the red berry holly crop from Traveller men marauding at night in their large Ford Transit vans, I immediately wanted to include it somehow in Rosie’s story. It will be a challenge to reflect the dark humor in these capers that marks much of contemporary Travellers’ dodgy dealings while portraying real personal conflicts that aren’t solely the perspective of ‘country folk’.